The influence of Incubation Conditions on Chick Quality
3Pages 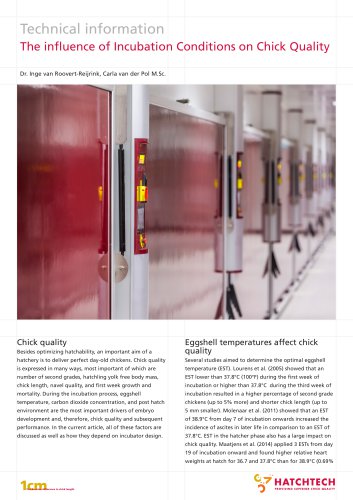 Technical information The influence of Incubation Conditions on Chick Quality Dr. Inge van Roovert-Reijrink, Carla van der Pol M.Sc. Chick quality Besides optimizing hatchability, an important aim of a Eggshell temperatures affect chick quality hatchery is to deliver perfect day-old chickens. Chick quality Several studies aimed to determine the optimal eggshell is expressed in many ways, most important of which are temperature (EST). Lourens et al. (2005) showed that an number of second grades, hatchling yolk free body mass, EST lower than 37.8°C (100°F) during the first week of chick length, navel quality, and first week growth and incubation or higher than 37.8°C during the third week of mortality. During the incubation process, eggshell incubation resulted in a higher percentage of second grade temperature, carbon dioxide concentration, and post hatch chickens (up to 5% more) and shorter chick length (up to environment are the most important drivers of embryo 5 mm smaller). Molenaar et al. (2011) showed that an EST development and, therefore, chick quality and subsequent of 38.9°C from day 7 of incubation onwards increased the performance. In the current article, all of these factors are incidence of ascites in later life in comparison to an EST of discussed as well as how they depend on incubator design. 37.8°C. EST in the hatcher phase also has a large impact on chick quality. Maatjens et al. (2014) applied 3 ESTs from day 19 of incubation onward and found higher relative heart weights at hatch for 36.7 and 37.8°C than for 38.9°C (0

Open the catalog to page 1

and 0.66% vs. 0.58%, respectively). These results suggest chick quality. De Smit et al. (2006) showed that a gradual that it may be even better to incubate at a temperature increase of CO2 to a concentration above 1% during the slightly below 37.8°C than above it; yolk free body mass of first 10 days of incubation had a positive effect on relative the 36.7°C incubated chicks was 0.65 g higher at hatch than growth during the first week of life, but did not result in that of 38.9°C incubated chicks. All these studies show the higher body weights at slaughter age. Everaert et al. (2007)...

Open the catalog to page 2

Post hatch environment affects chick quality From the moment of hatch until delivery at the farm, rectal Onagbesan, L. Arckens, J. De Baerdemaeker, and E. temperatures of chickens have to be maintained between Decuypere. 2006. Embryonic developmental plasticity of 40.0 and 40.6°C. At temperatures higher than 41.0°C, the chick: Increased CO2 during early stages of incubation chickens start panting to cool their body by evaporation. changes the developmental trajectories during prenatal and Panting can result in dehydrated chickens when they have postnatal growth. Comp. Biochem. Physiol....

Open the catalog to page 3

*Prices are pre-tax. They exclude delivery charges and customs duties and do not include additional charges for installation or activation options. Prices are indicative only and may vary by country, with changes to the cost of raw materials and exchange rates.
Compare
Remove all
Compare up to 10 products