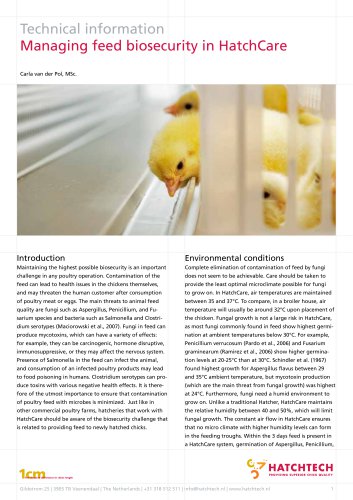 Technical information Managing feed biosecurity in HatchCare Carla van der Pol, MSc. Environmental conditions Maintaining the highest possible biosecurity is an important Complete elimination of contamination of feed by fungi challenge in any poultry operation. Contamination of the does not seem to be achievable. Care should be taken to feed can lead to health issues in the chickens themselves, provide the least optimal microclimate possible for fungi and may threaten the human customer after consumption to grow on. In HatchCare, air temperatures are maintained of poultry meat or eggs. The main threats to animal feed between 35 and 37°C. To compare, in a broiler house, air quality are fungi such as Aspergillus, Penicillium, and Fu- temperature will usually be around 32°C upon placement of sarium species and bacteria such as Salmonella and Clostri- the chicken. Fungal growth is not a large risk in HatchCare, dium serotypes (Maciorowski et al., 2007). Fungi in feed can as most fungi commonly found in feed show highest germi- produce mycotoxins, which can have a variety of effects: nation at ambient temperatures below 30°C. For example, for example, they can be carcinogenic, hormone disruptive, Penicillium verrucosum (Pardo et al., 2006) and Fusarium immunosuppressive, or they may affect the nervous system. graminearum (Ramirez et al., 2006) show higher germina- Presence of Salmonella in the feed can infect the animal, tion levels at 20-25°C than at 30°C. Schindler et al. (1967) and consumption of an infected poultry products may lead found highest growth for Aspergillus flavus between 29 to food poisoning in humans. Clostridium serotypes can pro- and 35°C ambient temperature, but mycotoxin production duce toxins with various negative health effects. It is there- (which are the main threat from fungal growth) was highest fore of the utmost importance to ensure that contamination at 24°C. Furthermore, fungi need a humid environment to of poultry feed with microbes is minimized. Just like in grow on. Unlike a traditional Hatcher, HatchCare maintains other commercial poultry farms, hatcheries that work with the relative humidity between 40 and 50%, which will limit HatchCare should be aware of the biosecurity challenge that fungal growth. The constant air flow in HatchCare ensures is related to providing feed to newly hatched chicks. that no micro climate with higher humidity levels can form in the feeding troughs. Within the 3 days feed is present in a HatchCare system, germination of Aspergillus, Penicillium, Gildetrom 25 | 3905 TB Veenendaal | The Netherlands | +31 318 512 511 | info@hatchtech.nl | www.hatchtech.n

Open the catalog to page 1

Technical information Managing feed biosecurity in HatchCare and Fusarium species should therefore not pose a problem in terms of mycotoxin production if initial levels of mycotoxin levels and fungal contamination are minimized at the feed mill. Bacteria, too, require a source of moisture to replicate, and the constant air flow in HatchCare will therefore limit bacterial growth. However, the high ambient temperatures preferred by the newly hatched chickens are ideal for growth of bacteria such as Salmonella enteritidis, which shows the highest growth rate around 37°C (Fehlhaber and Krüger,...

Open the catalog to page 2

Technical information Managing feed biosecurity in HatchCare Hatchery equipment – Another possible source of contamination is the hatchery itself. With every batch of eggs or feed, fresh microbes are inevitably introduced into the hatchery even when the strictest biosecurity regulations are applied. Residual microbes after hatching should be eradicated from the equipment to start with a clean slate for each new hatch. Incubators and equipment should therefore be cleaned and disinfected after each use. They should furthermore be allowed enough time to dry before being used again, as wet...

Open the catalog to page 3

*Prices are pre-tax. They exclude delivery charges and customs duties and do not include additional charges for installation or activation options. Prices are indicative only and may vary by country, with changes to the cost of raw materials and exchange rates.
Compare
Remove all
Compare up to 10 products